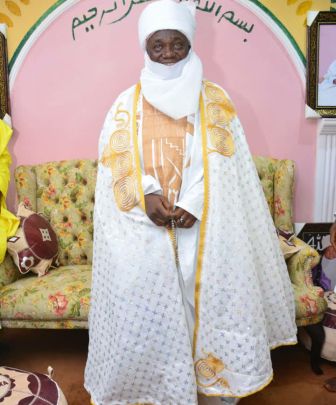 A new Daudu Agaka, Ilorin from the Shitta Alimi Oroganloye family ruling house has been turbaned; he is Alhaji Hannafi Omotosho Kawu Agaka.

The installation rites of the seventh Daudu Agaka, Ilorin, commenced on Friday at his Agaka ancestral home in conformity with the established traditions and in recognition of his kingship to the Emir.

In a brief remark, the new Daudu Agaka, thanked the Emir of Ilorin, for giving him the opportunity to serve his people, promising to serve the community and Ilorin Emirate with sincerity of purpose.

The turbaning ceremony was well attended by sons and daughters of Agaka, and personalities within and outside the country, including, Director General NAPTIN Alhaji Ahmed Bolaji Nagode, Alhaji Mohammed Wasaram , Alhaji Mohammed Salau, Engineer Kale Kawu and the Proprietor of Darul Kitab Wasunnah, Sheikh AbdulKadir Solagberu.

In a lecture, an Ilorin based Islamic Scholar, Ustaz Lukman Isalekoto, urged princes to be disciplined, lead by example and always distinguish themselves among their peer groups.

Ustaz Isalekoto, who said the position of Emirship is full of honour, charged all those entitled to the position to be totally different in their character and always remember their root.

He stressed the need for the families to always present Princes that stand best and demonstrate and exhibit leadership qualities.

He charged the new Daudu to make trio principles of self contentment, integrity and sincerity his watchword in his service to humanity, explaining that the principles are sure ways of greater success in life.

Earlier, in his speech Engineer Bolakale Kawu, described the new Daudu Agaka as a complete gentleman who had been contributing positively towards the development of Agaka community and Ilorin Emirate as a whole.

While appreciating the Emir of Ilorin, for choosing Alhaji Omotosho Kawu Agaka as the new Daudu Agaka, Engineer Bolakale Kawu expressed optimism that the reign of the newly turbaned Daudu Agaka would witness series of developmental activities in the entire Emirate.

Some of the personalities that spoke to Journalists urged the New Daudu of Agaka, Ilorin to use the position to reunite the family, ensure the growth and development of his people and domain, be focused and dedicated to the general well-being of his people.