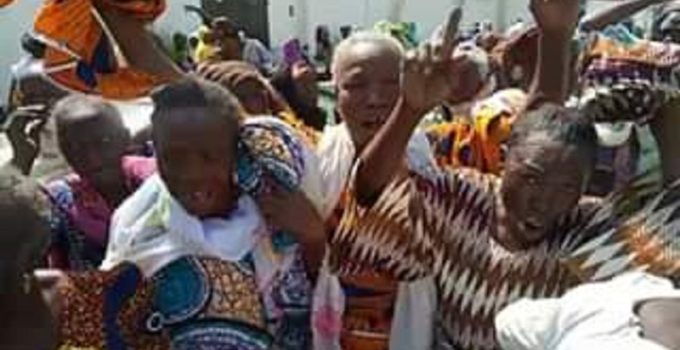 The Peoples Democratic Party (PDP) in Kwara state has sent a petition to the National Human Rights Commission (NHRC) in Abuja, calling for the probe of the alleged use of live ammunition and tear gas to dispersed aged women during the January 2nd, 2020 dawn demolition of Ile Arugbo in Ilorin.

O.M Aborisade called for a thorough probing of the incident with a view to bringing the perpetrators to book.

It said that thorough and unbiased investigation into the allegation of the use of live ammunition and teargassing of the aged women at Ile Arugbo will necessitate “a reprimand of the Governor of Kwara state and caution him against future use of arbitrariness on the good people of Kwara state that he is meant to govern, better their lives and make the state as a whole a peaceful place to dwell in.”

The party emphasised that ” the unambiguous and clear denial of the Kwara state police command of their involvement in this dastardly and barbaric act, either covertly or overtly call for proper indepth investigation as to the identity of the armed uniformed men in police uniform used by the Governor on the fateful day.”

It added ” We humbly present this petition to your office to cause an immediate enquiry to be conducted and carried out on the unfortunate, crude, and barbaric use of live ammunition and teargassing of defenseless aged women on the property known, called and referred to as Ile Arugbo in the G.R.A area of Ilorin in the early hours of Thursday, January 2nd, 2020.

” The gravamen of our petition is precipitated upon the use of maximum force on those aged and very old women which is now a thing of common and general knowledge by yet to be identified uniformed men that have been denied to be members of the Nigerian police by the Force state public relations officer, Ajayi Okasanmi and not on the proprietary or otherwise as regard the title and ownership of the parcel of land in dispute.

“It is a fact in the public domain that the aged women referred to above had gathered the penultimate night on the premises of the said Ile Arugbo, Haven gotten information of the impending illegal and unjustifiable demolition of the property, especially the haste at which the unconstitutional and unlawful demolition was to be carried out.

The PDP also argued that ” the denial of the Kwara state police command calls for inquest as to whether the Kwara state governor harbors and keep armed militia in Government House for the purpose of unleashing fear and terror on the opposition party in the state and such other individuals that are opposed to his government or his style of governance.

“There is also the need to compel and make it imperative on the Governor of Kwara state to disband all the unauthorized and illegal armed men that were used for this generally acclaimed shameful demolition exercise as police have denied their involvement.”