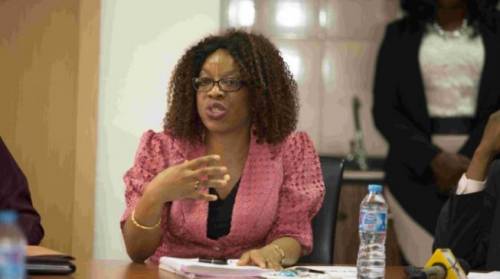 Some groups of stakeholders in the Nigeria power sector have frowned at what they described as continuous disparaging, spurious reports being hauled at the managing director of Nigeria Bulk Electricity Trading PLC,  Dr Marilyn Amobi by the same group of workers in NBET.

They said this conspiracy was done in connivance with some social media platforms to achieve their motive, after the federal government has given her a clean bill of health on some allegations raised against her, and reinstated her to the position as the managing director and chief executive officer of NBET.

The federal government had on Thursday, 9th January, 2020, through the office of the Secretary to the Government of the Federation, asked Dr Amobi to resume her duties as the managing director of NBET, after over one week suspension placed on her by the Minister of Power, Engr. Saleh Mamman, over an alleged infraction on the running of the agency.

But the stakeholder’s groups in a statement made available to journalists in Abuja on Saturday and signed by Otumba Durojaiyi of Energy For All Nigerians (EFAN);   Alhaji Omar Daura for Power Projects Watch  Syndicated  (PPWS);  Chief Femi Balogun for Greater Lights In The Villages(GLITV); Elder Victor Edem for Empowerment Through Power and Chief Nze Gregory Okafor for Hope In Buhari Power Projects (HIBPP).

According to them, “It was becoming more curious on the motives of these disgruntled workers who are using some willing media firms to perpetuate their long held ambition of making sure that Dr Amobi is sacked from her seat, so that they will continue their nefarious corrupt acts, which the embattled MD is fighting against since she assumed duty in 2016.

“What is more surprising to us is that a respected medium like Premium Times, which is known for their penchant for thorough investigative reports, has allowed itself to be a pawn being used to drag the reputation of this thoroughbred professional to the mud, by not obeying the sacred call of their profession, which demands the balancing of stories and digging dip to get to the true nature of what they want to send to the public for consumption.

“The Premium Times allegation that she was indicted by the EFCC, ICPC and the Auditor General office, was an allegation laced with ulterior motives and falsehood, lacking in in-depth and balanced journalism practice.

“If the news medium wanted to uphold the name and respect they are known for, they would have found out that there was no time that Dr Amobi was truly indicted by these anti-corruption agencies.

“Rather, the so called indictment, which they kept referring to in their various reports was a wishy-washy  paper  report someone from one of the anti-agencies, in collaboration with the same set of people at NBET, hurriedly put together and  circulated to some media houses  some years back, which spuriously stated that the MD had some questions to answer.

“But since then, it has been proven that the so-called indictment was meant to achieve personal motive of some persons, and to disgrace Dr Amobi and get her removed as MD of NBET.

“It will be important to note here that since that so-called indictment, the ICPC has not found it fit to arraign Dr Amobi, showing that the indictment was orchestrated to achieve a personal motive.”

The statement went further  to explain that for the Presidency to have called Dr Amobi back to her position as MD of NBET, showed that nothing indicting was found from all the allegations levelled against her by her detractors.

They added that the action of the minister of power in asking her to go on suspension, was to have a thorough and an unhindered investigation, which has been concluded by a four-man panel and the report handed over  to the federal government, as alleged by the Minister of Power,  even though  Dr Amobi was never invited to defend herself or hear her own side of the story in the course of the   investigation by the four-man panel.

The group advised media houses and other agents of those working together to ousts Dr Amobi as MD of NBET, to wait for the outcome of the report, noting that President Muhammadu Buhari knows that all the allegations levelled against Dr. Amobi were false, thus the need to restore her to her position, after going through all the reports submitted to him by the same anti-corruption agencies, and finding her not guilty.