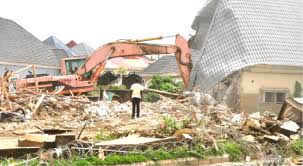 The aged women have explained why they cannot miss going to Ile Arugbo, the charity home of the late Dr Abubakar Olusola Saraki in Ilorin, Kwara state, at least once in a week.

Despite the demolition of Ile Arugbo by agents of Kwara state government, the aged women still thronged the place last Friday and again yesterday to receive gifts.

Four women in their 70s who spoke with newsmen at Ile Arugbo yesterday said that is the only place in Ilorin where their needs are catered for.

The women, Sarah Adebayo from Kwara south, Alhaja Saratu Raimi, Abibatu Suleiman, from Kwara central and Rachael Adebayo from Iyin Ekiti in Ekiti State disclosed that they have been patronising Ile Arugbo for about 40 years.

They said apart from the foodstuff and clothes that they normally received at Ile Arugbo, the late Second Republic Senate Leader, Dr Abubakar Olusola Saraki also sponsored them on Hajj and Jerusalem pilgrimages.

The women expressed delight that the immediate past Senate President, Dr Abubakar Bukola Saraki is following the footsteps of his father in this act of humanitarian gesture.

“Saraki had for about 40 years been using Ile Arugbo to distribute gifts to us, even during the military rule without any hindrance.

“The late Olusola Saraki was our benefactor who took good care of us during his life time. His son, Dr Bukola Saraki is also following the footsteps of his late father in this regard,” they enthused.

The women, in their hundreds and in high spirit, offered various prayer songs, asking God to grant Dr Bukola Saraki long life, sound health and victory over his adversaries.

As usual, food stuff, clothes and money were distributed to the women who defied the cold weather to arrive Ile Arugbo as early as 7.00 am.

The man who supervised the distribution of the  largesse to the women, Rasaq Aladie said Saraki has always made enough provision for the women whether or not he is in Ilorin.

Meanwhile, elders and members of the Ilorin West chapter of the Peoples Democratic Party (PDP) have advised Kwara state governor, AbdulRahman AbdulRazaq to face the task of governance instead of dissipating energy on petty issues.

They said every efforts aimed at erasing the legacies of  the late strongman of Kwara politics and Second Republic Senate Leader, Dr Olusola Saraki will fail.

The PDP chairman in Ilorin West LG, Alh Ahmed Baba Okota made these submissions at a news conference  he addressed on behalf of the party’s stakeholders at the party’s secretariat along Agbo- Oba area of the Ilorin metropolis.

Akota said that  the late Saraki’s legendary humanitarian  gestures during his life time had implanted his love permanently in the hearts of the people.

He added: The late Dr Olusola Saraki’s legendary humanitarian activities were not restricted to the period of partisan politics alone. Even, during the prolonged military rule in Nigeria, Saraki Oloye  continued with his unmatched humanitarian gestures at his charity home- Ile Arugbo.

“Recent actions of Governor AbdulRazaq which tend towards erasing the legacies of Baba Saraki, therefore, came to us as a rude shock.

“We concur with the submissions of earlier commentators on these issues, both prominent individuals and organisations that the government’s actions are nothing but a pure vendetta and vindictiveness!

“It’s important to make it clear to His  Excellency, Governor AbdulRahman AbdulRazaq and his advisers that there is nothing anyone can do to erase the legacies of the late Oloye Saraki. Indeed, Saraki lives in the heart of the people. And this is not accidental, it was designed.

“The Wazirin Gari had always been there for  his people at the time of their needs. It was Saraki who provided water for our people when they were thirsty and no help was coming from anywhere. Saraki erected  brick water tanks at strategic locations within Ilorin metropolis and used his water tankers to supply them with potable water for  their domestic use. It was the same Saraki that constructed bridges across the popular Amule river( Amule Saraki) to facilitate vehicular movements in the downtown Ilorin.

“Saraki also sponsored the education of numerous indigent students and medical treatments of many, especially the aged. The list of Saraki’s interventions in the lives of the people of Ilorin Emirate, in particular, and Kwara in general is endless. This is why they have taken him as their hero.

“In the light of the above we will like to call on Governor AbdulRahman AbdulRazaq to listen to the voice of reason by rescinding his decisions aimed at erasing Saraki’s legacies. It’s the duty of every government to ensure the welfare of the people.

“So, if anyone is engaging in humanitarian gestures to put smiles on the faces of the needy and the downtrodden, any serious government should encourage such an individual.”