We have succeeded in flushing fake corps members – DG NYSC 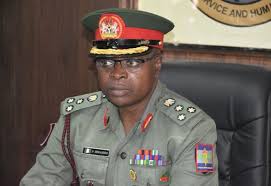 The National Directorate of the National Youths Service Corps (NYSC), Brigadier General Shuaibu Ibrahim, is said to have succeeded in flushing out fake corps members who are attempting to participate in the exercise without due qualifications.

The Director General stated this while speaking with newsmen in Keffi immediately after he was conferred with a merit award by the Afo Community Development Forum in Keffi during the weekend.

He stated that the exercise which was made to inject sanity into the system has recorded a remarkable success due to the diligent efforts by the organization to properly scrutinize all documents and the institutions, which every prospective corps member claimed have attended.

“We have succeeded in separating chaffs from the grains, which means we have sanitized the system through diligent efforts, and we are ever determined to make the NYSC system most credible and reliable”, he assured.

General Shuaibu stated that as a result of the exercise, only very few people were arrested which means that a reasonable success was recorded adding that they would not rest on their oars towards making the NYSC a model for integrity.

He therefore tasked particularly parents to always encourage their children to do the right things through hard work, dedication and honesty, stressing that they should avoid cutting corners as cheating does not pay.

“Since cheating does not pay, they need both the parents and their wards to always chart the path of honour, dedication and hard work”, he admonished.

Speaking about the award conferred on him, General Shuaibu described it as highly inspirational and pledged to continue to dedicate himself to the services of his fatherland and humanity in general.

Also speaking, one of the awardees and Commissioner of Police, Force Headquarters, Abuja, Ede Ayuba Ekpeji, expressed his delight with the award saying that it has gingered him to continue to do more in the discharge of his responsibilities both to his community and his fatherland.

He described the award ceremony as unique and desirable as it has afforded them the opportunity to unite and fraternize for the purpose of charting the course of unity, peace and understanding amongst themselves, and other communities in the interest of togetherness.

The awardee them tasked all Afo sons and daughters to always strives to excel in their chosen carriers and contribute in their own ways to the unity, peace and development of the society.