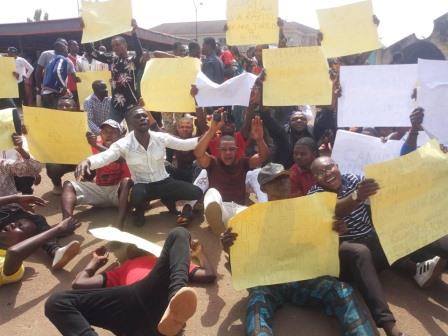 It was a mixture of drama and confusion in Abakaliki, the Ebonyi state capital on Thursday as two protesting groups from Ohaukwu local government area invaded the Government House over the reported squabble between their council’s chairman, Clement Odah and a member Ebonyi State House of Assembly, Chinedu Onah.

Onah representing Ohaukwu South State Constituency had on Wednesday, alleged to have been slapped by the chairman over matters bordering on stepping down of nominees from the chairman for political appointment.

Onah’s supporters with placards calling for the removal of the council chairman from office, first trooped to the Assembly complex in Nkaliki where the chairman was summoned for interrogation by the lawmakers, before proceeding to the Government House.

While at the Assembly Complex, the pro-Onah protesters described the attack on Onah as deliberate move to distract the lawmaker from performing his functions.

In a statement endorsed by Onwe Erastus on behalf of the others, the protesters noted that the attack was another act of marginalisation and affront on the people of Ohaukwu South constituency.

The statement further read: “We are worried that this deliberate attack by the council chairman is a direct affront on the people of Ohaukwu South State Constituency who the lawmaker represents, and as such, we may begin to experience another set of injustices and marginalization from the chairman.

“We call on both the State House of Assembly and security agencies to quickly initiate all measures that will unravel both the immediate and remote causes of the attack and prosecute the offenders in line with the law of the land.

“This is a very bad precedence and may become a norm, if not checked.”

In the same vein, supporters of Odah led by Benjamin Ogbu, at the Government House, said they took to the street in protest, to counter the insinuations that the council chairman beat up the member representing Ohaukwu South State Constituency.

The group declared their unalloyed support for the council chairman, exonerating him from any wrongdoing.

Ogbu explained: “We heard what people are saying that our council chairman attacked and beat up somebody at the Ebonyi State House of Assembly.

“He didn’t do that, he is doing very well in his duties, and he does not need any distraction, and that is why we came to counter that.

“Our council chairman is a peaceful gentleman and he cannot do that.”

The protesters were addressed by the Deputy Principal Secretary to the Governor, Honourable Emmanuel Obasi, and the Deputy Chief of Staff Government House, Okechukwu Nwakpu, respectively.

The government officials advised the two protesting groups to channel their grievances properly, warning them against violence, while promising that Government would look into the matter to find a way of mutually settling the disagreement.

There was heavy presence of security agents especially at the Government House during the protests.

Recall that Odah and Onah had issues at the State House of Assembly during screening of Management Committee members-nominee from Ohaukwu local government area sent to the Assembly by the state government for confirmation.

It was alleged that Odah slapped Onah at the Assembly complex on Wednesday as the two leaders clashed.

The situation led to the Assembly calling for arrest and prosecution of the council chairman over his purported action.

Leader of the Assembly, Victor Chukwu had  moved a motion calling for immediate arrest and prosecution of the council chairman  over the incident, a motion which was unanimously adopted.

Meanwhile, Odah in an interview at the Assembly complex on Thursday, once again denied the allegation, describing Onah as his brother.

He however, admitted that they had an altercation in a bid to chart the way forward for their subjects.

On whether he would accept the outcome of the Assembly’s investigation on the matter in good faith, the Council boss said: “Well the job of the committee is to carry out fact finding about the report they got.

“Not all the committee members were witnesses to what happened yesterday in the hallowed chambers.

“But the outcome is still in process and I will not speak for the chairman if the committee.

“We only had an altercation which cannot be denied

“I have a duties anyway, to go and protect my people anywhere and anytime any matter is affecting them and also to intervene

“I have the right to come and interface with other members representing us when any matter is affecting our people.

“The executive and other arms of government are mean to work together.

“I believe the committee is a committee that is very alive to their responsibilities and I believe their findings and verdict will be positive.

“I know they will be very fair and stick to the truth.”