China begins manufacturing of led bulbs in Ebonyi by Jan 2020 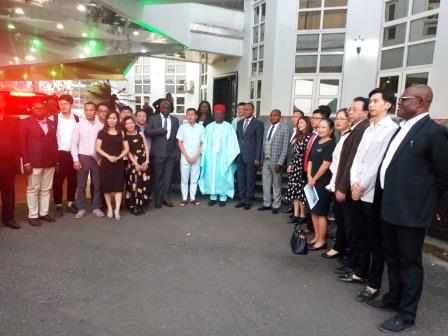 A team of Chinese investors have arrived Ebonyi State to commence action on establishment of factories for the manufacturing of high quality furniture, shoes, electric bulbs, building tiles, among others by January 2020.

Receiving the team, numbering about 26 from different Chinese companies on a courtesy call at the Government House, Abakaliki, Governor David Umahi indicated that the collaboration was part of outcomes of his official visits to China.

He explained that one of the companies has been engaged by government to fix cinemas at some strategic facilities within the state while another was to supply high quality electric bulbs and light for the state’s shopping mall, the College of Medicine in Uburu and so on.

Umahi also explained that the electric bulb manufacturing plant being established by the Chinese in Uburu, Ohaozara local government area would commence production of LED bulbs by January 2020, adding that the use of LED bulbs imported from China for the streetlights has saved cost for the state owing to their longevity.

According to the governor, a $370,000 contract has been awarded to one of the companies for the supply and installation of modern electronic visual gadgets in the 100-seater capacity new Executive Council Chambers and Conference Hall at the new Government House, Centenary City, Abakaliki.

The governor who confirmed that the Chinese companies have agreed to  release their experts to the State for 2 years to ensure quality of the products as well as train locals in their technology, promised to lease to them shops at the State Shopping Mall free for two years to do their businesses.

He however maintained that for any of the Chinese companies to be patronized by the State, it must first set up a show room for it’s products, and be ready to collaborate with the State in training manpower.

Umahi said: “We have our very good friend that is selling Tiles.

“He has sold a lot of beautiful tiles to us…

“He is also supplying all the Tiles for the college.

“And he has also agreed to establish manufacturing and processing plants in Ebonyi state.

“When we started this administration, we were spending a lot of money on electric bulbs;  you buy them today, they die tomorrow, until we went to China and they sold us those bulbs,  and not even one has died for the past two years plus”

“So they are building a factory in Ebonyi State, in fact in Uburu and they will start production of LED light, Solar light etc, by January.

“They had already brought  their equipment.

“We have insisted that before we buy anything from you, you must come to set up a show room at the shopping mall before the end of March (2020), and penalty for failing to do so is 1 million US dollars…”

Leader of the Chinese Team, Jack Jiang, commended the Governor for his interest in industrizing the State.

He expressed optimism that the Chinese companies would take advantage of the many available markets in the State to bring about mutual economic benefits.

In an interview, Jack assured that they would meet all the demands of the State government as they had already commenced actions on the terms of the collaboration.

The team was later hosted to a gala night at the new Governor’s Lodge, Centenary City, Abakaliki.