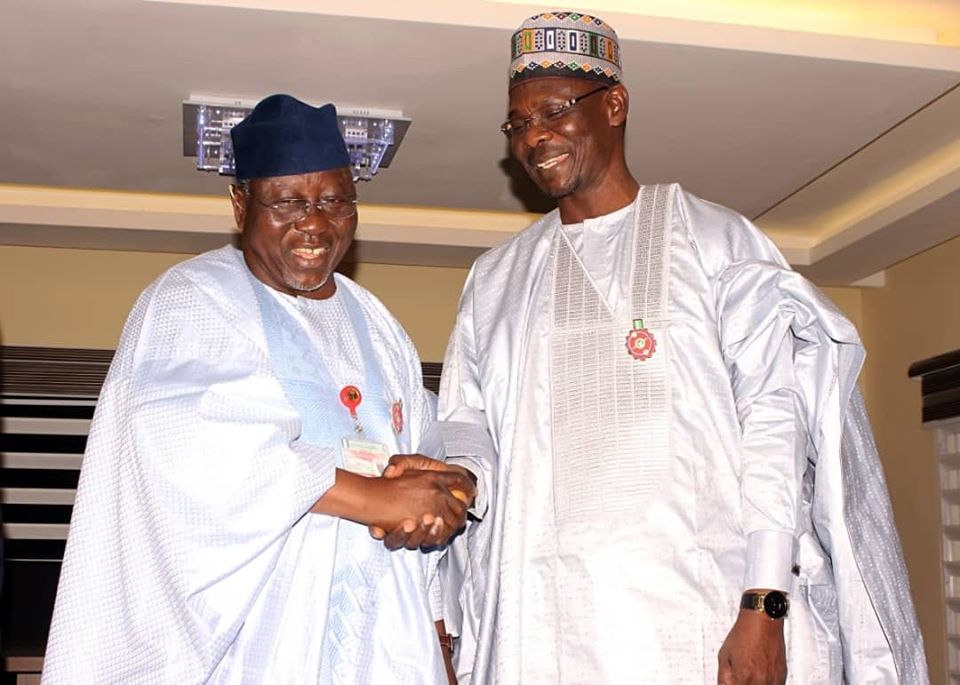 Contrary to recent speculations making the rounds in some section of the media, Nasarawa State Governor, Engineer Abdullahi Sule said his immediate past predecessor, Senator Umaru Tanko Al-makura did not leave behind any debt while leaving office.

According to a press statement issued to NATION’S PRIDE, by the Special Assistant to the Governor on Media, Mr. Ali Abari, the Governor made the clarification while paying a courtesy call on Senator Al-Makura in his Abuja office Thursday evening.

Engineer Sule, addressing a joint press conference during the visit, stressed that there was never a time that he said Senator Al-makura has left behind over N18 billion as debt and that the burden of such debt was stopping his administration from running.

The Governor who was accompanied on the visit by his deputy, Dr. Emmanuel Akabe, recounted what he told stakeholders at a recent retreat urging them to tighten their belts because of the expenses ahead of the state based on the revenue coming to the state.

“I have mentioned to them, that we should wake up and improve our revenue generation. And indeed, the budget that we presented yesterday is showing a revenue of 26bn, which will show that we are working towards improving the revenue base in order to continue to prosper as a state.

“I mentioned that today we are having some deductions which every state in the federation is experiencing, not only Nasarawa State. We are having budget support refund, bailout refund and Excess Crude Account refund. And all these refunds are actually eating into the amount of money we receive monthly,” he explained.

While distancing himself from the said report, Engineer Sule called on Senator Al-makura to remain the gentleman that he was and to ignore the speculations trending in some section of the media.

The Governor re-emphasized the respect he has for his predecessor, saying that Nasarawa State was indeed lucky to have Senator Al-makura as governor.

“The ECA we received, we can actually see it on ground, because there is no governor in the history of Nasarawa, with due respect, who has done more than this gentleman,” Engineer Sule said.

He added that nothing has stopped his administration from running.

“In fact, nothing has stopped our government from moving, as government is indeed moving. We are negotiating on the new minimum wage, we have also set up commissioners, we have never skipped any month paying salaries, we pay our salaries.

“So, I don’t know how government could stop. And I have always mentioned that we will, by the grace of God, continue and execute all the projects started by the government of Tanko Al-makura,” Engineer Sule said.

Also addressing the press conference, Senator Al-makura expressed delight on the visit by his successor, describing Engineer Sule as reputable, focused and capable of taking Nasarawa State to the Next Level.

While noting that he wasn’t surprised by the speculation trending in the media, the former governor however urged journalists practising in the state to abide by the ethics of the journalism rather than to resort to yellow journalism.

“I will urge you to cleanse yourselves, because there is no point putting us here to start explaining things that never happened. It’s very unkind of whoever speculated this, it’s very unfair to his profession, to both of us and to the people of Nasarawa State,” Senator Al-makura said.

He thanked the governor and his deputy for the prompt visit which he said, will serve to nib the speculation in the bud.

The lawmaker said he considered the administration of Engineer Sule as a continuation of his regime because they share the same values and vision for a better Nasarawa State.

“I am saying with every sense of sincerity and honesty, that I did not go to any bank to take loan on behalf of the state,” he said.