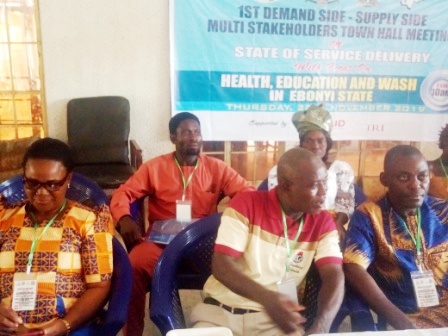 The Social Contract principle, the sociological foundation of relationship between the government and the governed demands that while the citizens relinquish their authority via collective mandate to form the government, government should on the other hand, effectively cater for the needs and aspirations of the people.

This symbiotic, bi-lateral relationship forms the bedrock of the demand and supply trajectory in which government is on the supply side while citizens are on the demand side.

Most often however, it appears that the citizens are not only short-changed by the government but also denied the means of both self and collective expression of their dissatisfaction with government’s service delivery. Out of fear of undesirable consequences, some stakeholders who would have dared the government always kept mute, joining others to hope endlessly for a better tomorrow.

Under such circumstances, holding government accountable could tantamount to, or misconstrued either as “Hate Speech” or treason.

On the other hand, research has shown that some citizens who bicker against government, most often do so out of ignorance of the many welfare services being made available for their assessment.

Government also, oftentimes, may neglect or be oblivious of the priority needs of a people in a particular time thereby taking the risk of embarking on projects and programmes considered by the citizens as irrelevant and wasteful.

Such anomalies are often responsible for the tensions existing between the Leaders and the led.

It is in attempt to bridge this gap that a Civil Society Organisations, Development Integrity Intervention Goal Foundation (DIG), in collaboration with the Office of the Special Adviser to Ebonyi State Governor on Inter-Party and Labour matters, on Friday, organised the first ever Ebonyi State Demand side – Supply side multi-stakeholders Town hall meeting on State of service delivery in rural Ebonyi communities. Its focus were mainly on the areas of health and education sectors; Water, Sanitation and hyegine (WASH)

Addressing the stakeholders at the Town Hall meeting held at the Multi-purpose hall, Cabinet Office, Abakaliki, the Executive Director, DIG Foundation and Ebonyi State Coordinator, Office of the Citizens, Oliver Aja  Chima, explained that the event was aimed among other things, at establishing Permanent Dialogue Mechanism to engage stakeholders in reviewing Open Government Partnership implementation and service delivery issues around the focus areas.

He added that the objective was to offer citizens the opportunity to have direct interactions with heads of the focused government ministries, departments and agencies, thereby providing room for citizens to project their prioritized needs/ challenges for informed decision making by the relevant stakeholders.

He explained further that the OGP process has been finalized in Ebonyi State leading to the inauguration of a 32-man steering committee and launching of State Action Plan by Governor David Umahi on April, 29, 2019, with three thematic areas: Fiscal Transparency, Access to Information and Citizens Engagement.

Chima encouraged all participants to air their views, grievances and suggestions without fear, adding that their protection were guaranteed.

In an interview, Chima assured journalists that the outcome of the meeting would be articulated and duly submitted to the Government via the appropriate channels.

Chima emphasized: “We want to see how government and citizens can be coming together to agree on certain things.

“We have discovered that there is a wide gap between the people and those in government.

“The objective of this meeting is for the citizens to be aware of policies, programmes and activities of government in the areas of health, education,  water, sanitation and hyegiene.

“Also for the citizens to project their prioritized needs, and the stakeholders can make informed decisions

“For instance, it is important that in 2020 Budget,  the people’s needs should be captured.  This and more are the main objectives of this meeting.

“The citizens should feel free to air their views and opinions, especially those from the rural communities. “They should be free to voice out their needs before the government officials seated here.

“Whatever anyone say here,  his or her protection is guaranteed .

“The DIG Foundation is an internationally recognized organisation, and when we speak, the nation will hear.

“With the approval of State government, we had asked communities to submit their prioritized needs which they have done, and we will articulate them and submit to government through the Ministry of Finance and other appropriate agencies.”

The State government officials present at the meeting including the Permanent Secretary, Ministry of Health, Dr. Chris Achi and his counterpart of the Ministry of Water Resources, Moses Oshibe, among other resource persons, intimated the citizens of the various services, policies and programmes of government aimed at uplifting their living standards.

According to Achi, Governor David Umahi had embarked on complete renovation and upgrading of all General hospitals across the State, ensuring that each of them were managed by qualified resident doctors while treatment for some named ailments were made free.

Speaking to newsmen, the Special Adviser to Governor Umahi on Inter-Party and Labour Matters,  Mrs Jennifer Adibe-Nwafor, reiterated the essence of the Town hall as pertinent in bridging the gap between supply and demand in government – citizen relationship.

Adibe-Nwafor summed: “For me, coming from government side, we are the supply side while the citizens are the demand side.

“It is very important that we tell the citizens what the government is doing in the area of water, education, health, among others.

“As it is today, many people do not even know that Malaria treatment is free in government hospitals. But with this programme the citizen would get to know that and other services of government in that direction.

“Ebonyi government has signed into Open Government Partnership (OGP),  and has done a lot to improve the well being of the citizens.

Most Stakeholders interviewed from the stable of the citizens expressed appreciation to the State government for its aggressive infrastructural development but submitted that most rural areas within the State still lack priority basic amenities such as electricity, good roads, potable water.

They identified the lack of these basic amenities as great impediment to adequate sanitation and hygiene which, according to them had impeded healthy life in rural areas.

They called on Government to capture those priorities in its action plan for the coming years.

One of the participants from Ibii Community in Afikpo North Local government area, Mrs Orieoma Eni, decried the deplorable state of the road leading to their community and called on Governor Umahi to extend his infrastructural revolution to them.

Eni lamented:”We have only one road leading into our community.

“During rainy seasons we used to be trapped inside the villages due to the impassable state of the road.

“As it is now, we don’t have electricity and water and our little efforts cannot give us the needed hygiene standard for healthy living.

“We have always contributed our quota in civic responsibilities and we need government to reciprocate this by showing us a sense of belonging.”