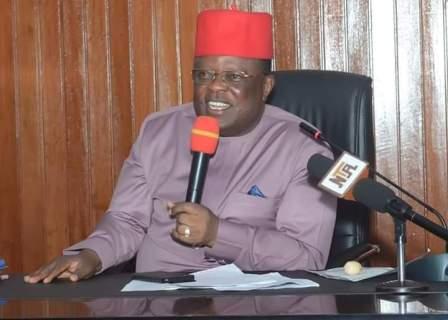 Ebonyi State Government has accessed a total of 12 billion Naira fund of the Central Bank of Nigeria interventions between 2016 and 2019.

The disclosure was made in Abakaliki by the Apex Bank’s Branch Controller in the State, Chris Adayi  when he paid an official visit to Governor David Umahi during Wednesday State Executive Council session.

Adayi,  also disclosed that another total of Four billion, two hundred and Eighteen million, nine hundred and eight thousand, four hundred and fifty naira worth of interventions were accessed directly by others numbering over 4000 in the State within the stipulated period.

He noted that the Bank pursuant to its social responsibility has embarked on construction of school blocks, installation of water boreholes, purchase of equipment and gadgets for schools and the physically challenged as well as payment of hospital bills of indigent patients across the State, among others.

He emphasized that the Bank since its inception in the State in 2010 has continued to enjoy the goodwill of the government and the people and extolled the transformational strides of Governor David Umahi which has metamorphosed the State into the fastest growing economy in Nigeria.

Adayi, however regretted that Ebonyi State was low in Financial Access Performance rating of the CBN. According to him, while other States in the zone were recording an average of between 25.4 to 28.7 per cent exclusion rate, Ebonyi State was still very far at 43.6.per cent.

He explained that it was on account of that, that the State has been selected in the South-East zone for a pilot exercise for an account opening week of the CBN, between December 2 to 7 in all the 13 local government areas of the State.

The Branch Controller who sought the assistance of the State government in the areas of provision of land for Staff residential estate, equipment for sustainable digitization of government payments as well as media publicity for its activities, also assured of their unflinching support towards actualization of government’s visible and laudable initiatives towards economic development.

Governor Umahi in his reaction assured the CBN of government’s readiness to offer them all needed assistance to continue to thrive with impact in the State, adding that the State would fully mobilize citizens for the account opening week.

He expressed gratitude to the CBN governor, Godwin Emefiele for availing the State of the Apex Bank’s intervention funds in Agriculture and other entrepreneurial development.

He emphasized the need for the people of the State to open bank accounts and key into the many intervention funds of the CBN for the State, warning that civil servants who fail to regularise their bank verification numbers would not be paid their monthly salaries.