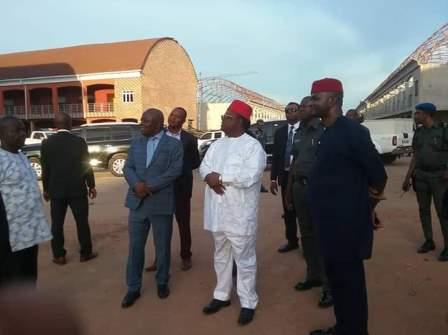 In line with the Ebonyi State Government’s resolve to partner its indigenes in diaspora for the development of the state, the state government has directed the registration of its citizens resident in all parts of the world.

Also to be registered are all Ebonyi Development Unions and associations in the 36 states of the federation and the Federal Capital Territory.

Briefing newsmen on the development in Abakaliki on Friday, the Special Assistant to Governor David Umahi on Ease of Doing Business and Ebonyi in Diaspora, Hon. Collins Agbo, explained that the aim of the registration was to critically encourage all businessmen and women of Ebonyi extraction, including other business moguls globally to join in driving the current investment regime in the state.

He added that the move was geared towards wooing Ebonyians and non-Ebonyians within and outside Nigeria to look at the direction of the state in both their socio-political and economic ventures and plan for a home- coming to increase the state’s population, create competitive market and increase its gross domestic product.

He called on all intending persons wishing to do any genuine business in the state to take advantage of the open wave and indicate interest through an e-mail address opened for the purpose: SAeodb.ebonyidiaspora@gmail.com.

Agbo who enumerated the many achievements of Governor David Umahi in the areas of security, road infrastructure, power and energy, grants and loan empowerments to businessmen and civil servants; commerce and industry as well as digitization of property titles and registrations procedure among others, emphasized that such innovations had created enabling and guaranteed environment for investments.

He stressed that the government has set up a tax appeal tribunal in the state in order to ensure that no investor is double-taxed or unduly taken advantage of, as well as make payments more convenient, peaceful, justifiable and affordable for investors and other business communities in Ebonyi.

He further assured that his office, in collaboration with the State House of Assembly has started the process of domesticating all relevant laws and executive orders on Ease of Doing Business in the state.

He added that the governor has approved an inter-ministerial committee, under the chairmanship of the deputy governor to drive the initiative to fruition.

Agbo explained: “The administration of Engr. David Nweze Umahi, in his determined effort to strategically position Ebonyi State among leading States in Ease of Doing Business in Nigeria, has embarked on a number of initiatives to improve business environment.

“As I speak to you, the governor has approved the constitution of an inter-ministerial committee, otherwise known as Ebonyi State Enabling Business Environment Committee to be chaired by the deputy governor.

“The governor has, with regard to Ebonyians in the diaspora, directed my office to register all Ebonyi development unions/associations in the 36 States and FCT, in all African countries where Ebonyi people are resident, and indeed in all nations of the world where Ebonyi men and women can be found.

“The Governor wants them to think home.

“Ebonyi has become the envy of other States in all spheres of life and it is speedily becoming the hub of business in this part of the world.  “We call on Ebonyians wherever they are, non-Ebonyians from any part of the world to come and see for themselves the greatest wonder of the century, the new Ebonyi where every legitimate business thrive.”