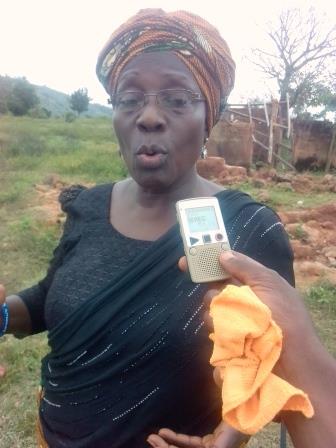 The president of a sociocultural group known as the Berom Women Development Association, BWDA, in Plateau State, Ngo Florence Jambol has decried the dangerous effect of the aftermath of attacks melted on Plateau communities especially on women and children.

She noted with concerned how the attacks on the Plateau has exposed some of the women who were mostly farmers into vices that were hitherto unknown to them.

The president of the association was speaking at a funeral service of the Gwom Shonong, the traditional leader of the Shonong community in Riyom Local Government Area of Plateau State, where she expressed worries on government’s inability to create an environment conducive for the natives to return home and rebuild their ruined Communities to continue their livelihood.

She said, “I am sad as I speak to you now, yes we have come home to bury our chief, but nobody is living in this community this day. This place has been attacked more than four times. Still the people are in dare need to return home especially women, because a woman prefers to take care of her situation even in a shackle than outside her home”.

Ngo Florence expressed concerned on the plight of the displaced communities especially women and children who are now exposed to vices and have become soft-target to traffickers.

She appealed to government at all levels to make the security of her citizens a top most priority and come to the aid of the attacked communities as the people are willing and ready to return and rebuild their homes if their security is guarantee.

Our corresponding in Jos learned that Shonong community had heard more than four attacks from 2012 and the people are always rebuilding their home until the was attacked that hit the community and many other communities in Barkin Ladi, Jos South and Riyom LGAs that led to the death of over 200 and over 3000 people were displaced, houses and farmland destroyed in June 2018.

At present, the community like many other attacked communities in the Plateau is in ruin as the natives have been displaced and can only return home to bury their loved ones under tight security cover and go back to either IDPs camp or to their relations in Jos.