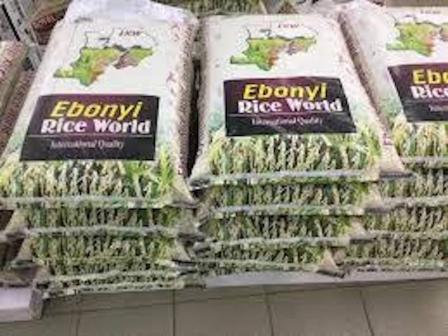 The Abakaliki Rice Mill Industry in Ebonyi State is probably the largest privately owned rice mill cluster in the South-East and South-South part of the country.

It is the central processing point of the popular Abakaliki rice which has gained both local and international reputation as the most nutritious brand.

In spite of the recent establishment of three major modern rice mills plants, one in each of the three senatorial zones of the State by the State Government, the Abakaliki rice mill still attracts the largest market in rice milling and distribution.

Over the years, the mill owners have continued to evolve innovations in the mill. For instance, between the past 10 to 15 years, the destoning machines were introduced which had facilitated the packaging of stone-free Abakaliki rice.

The past few months also witnessed the innovative introduction of weighing scales as a replacement for the old tin measurement popularly known as bushels.

However, in spite of those innovations, there are still many processing challenges faced by the millers, farmers and other stakeholders. First is that most of the rice being milled are products of crude parboiling methods.

Secondly, the mill lacks modern state of the art infrastructural, environmental and operational facilities. Most of the milling machines are obsolete and thus low in both output and quality.

In recognition of the above, the state government under Engineer David Umahi has set machineries in motion toward modernizing the mill for optimal performance through his planned introduction of modern rice milling and processing machines into the mill.

Intimating the millers of government’s intention on Wednesday, October 16, the Deputy Chief of Staff to Governor Umahi, Chief Okechukwu Nwakpu allayed the fears and suspicions of some millers and mill owner that the planned gesture was a ploy by the government to seize the mill from the owners.

He explained that the move by the government was to ensure improvement in the industry to meet international best practices and standard as introduced in other sectors by the Umahi-led administration.

He emphasized that the mill still remains and would continue to remain the property of the mill owners after introducing the modern machines.

According to Nwakpu, all that was required of them was to form cooperative societies through which the government would link them to sources of fund from the Central Bank of Nigeria and other financial institutions to enable them acquire the new machines.

He noted that the government has the best plan of bringing modern infrastructures: water, good roads, recreational facilities and better buildings into the mill for their comfort, adding that the mill must meet the standard of the governor in the state.

Nwakpu further directed them to set up a committee to design a prototype of the nature of mill they desire which would be juxtaposed with that to be designed by government for reconciliation in a round-table before implementation.

He also directed them to set up another committee to coordinate arrangements for government facilitated loans for the cooperatives towards procurement of the new machines.

Consequently, a 7-man committee headed by the caretaker chairman of the mill was inaugurated at the meeting for the purpose.

Nwakpu explained: “Most importantly, let me inform you that the government has not come to take over the rice mill.  It is still your property.

“The only thing is that it has to meet up with the present standard which this government is known for.

“You own your property, you choose and form your cooperatives, you get access to the money and develop it.

“But if you have the money, you develop your mill according to the standard.

“At the end of the day, we will come to a round table and agree on the best one to follow.

“You will give us a committee that will liaise with the SA on Small and Medium Enterprises, so that by Friday, she will meet with you people to discuss how your cooperatives will be like.

“For us to assist you, you must be ready to cooperate with government.

He commended the governor for his thoughtfulness and care for the mill stressing that the benefits cannot be overemphasized.

Ogodo said: “One, most of the Engines we are using are now obsolete, outdated.

“So, giving us advanced machines will not only enhance our productivity but will also give us a better service.

“In this case, I am commending the effort of the governor, having deemed it wise to make Abakaliki RiceMill one of the best in the whole country.

“So we stand to benefit much from it:

“One, our rice, our product will appear better and compete favourably with other rice in the international community.

“So, we are not going to negate the action in any way but we are going to give our full support to ensure that everything come to fruition.

Speaking  to Journalists later, Ogodo however, advocated for  medium capacity machines, little lower than those in the government owned Mills to enable them accommodate the milling of smaller individual quantities of rice paddy.

He observed that though Ebonyi State was one of the highest rice producer in the country, the challenges of dry season farming and poor mechanization still limits some farmer’s individual outputs

He said: “Ebonyi State from my elementary knowledge is one of the highest rice producers in the entire nation.

“The only challenge we are still passing through is the issue of dry season farming which I know that we just need irrigation in some areas to balance up.

“Another is that our people here are not so much into mechanized farming.

“The tonnage required for a high capacity Machine like the ones at the three senatorial zones is so high that an individual cannot raise rice paddy large enough for milling at a point in time, and this has been an envisaged challenge.

“So I am advocating that the type of advanced machine to be brought to us should be smaller.

“Let’s have about the size of 6 tonnes capacity, so that individuals can make use of the machines for smaller quantities of rice.

“This is the challenge, and it is not that we don’t have enough paddy to make it functional.

Others who spoke to our correspondent including State chairman, National Association of Road Transport Owners, (NARTO), Comrade Emmanuel Idike, and Ebenezer Udegbulam also described government initiative as a welcome development, an act of encouragement, and praised the Governor for that.

Idike called on government to also extend such gestures to his members adding that the intended cooperatives and loans would facilitate business.

Udegbulam, a Mill owner, however, expressed worries over the ability of smaller investors to procure the machines when introduced.

On the question of durability, Udegbulam said: “A new thing is a new thing” but expressed worry on whether they would be able to maintain the machines and secondly, on the modalities for the cooperatives and the intended loans.

He further observed that the old machines seemed to be more rugged than the expected new, modern ones, citing example with the government rice mill in Iboko which according to him, often breaks down.

He expressed happiness that the visit and explanations of the government officials had allayed their previous suspicions and fears over government’s  intentions for the Mill.

Recall that some group of youths from the host villages of the Mill had some days before the meeting, allegedly prevented those suspected to have been contracted by the government to fence the Mill, preparatory to commencement of the modernization plans.

Meanwhile, the recent introduction of Weight and measure for rice selling in the Mill instead of the usual bushel measurement has been received with mixed feeling by most customers.

While some buyers complained that the new measure was responsible for the current high cost of rice in the mill, others alleged that they were being shortchanged by the sellers who capitalize on the new method to give them incomplete measurement.

A buyer, Emeka Arinze narrated: “l came to buy rice here and they are telling me that the general thing here is that they don’t sell 25kg at normal price; that 25kg is sold a little higher.

“That if I have to pay the regular price, l will have to be measured 22.5kg which is equivalent to the former one bushel measurement.

“I actually have a mixed feeling over that because last time I came, it was much cheaper and I don’t know why.

I think the old bushel measurement goes better for me.”

A rice marketer, Uzoamaka Awoke, however, attributed the recent high cost of the product in the Mill to Federal government closure of borders.

“Now,  the new introduction of Weight and measure with scale is a new thing to our customers.

“So, at times when you tell them about 25kg, they will be like saying, please give me the normal bushel because that of the 25kg, the money is higher than the previous bushel.

“Those who have money will buy the 25kg, but others who don’t have will always beg that they be sold the normal bushel wihich is 22.5kg and instead of allowing the customer go empty handed, you will oblige him or her.”

According to her, they sometimes, also determine the price per Kg from the cost of each bag of the rice paddy which also depends on the quality of the rice.

On the issue of bringing in modern milling machines, she said: “I like it. It will give me a better service than the one I am using now.

“But will the government pay some percentage of the cost for us?

“If government facilitate loans for it, it is good but I don’t think it will work on individual basis but with the management of rice mill, it can work.”

On the capacity of the present milling machines at the Mill, Obasi said they are of various categories.

According to her, a 26-Blackstone when it works for 4 hours non-stop, can churn out above 100 bushels.