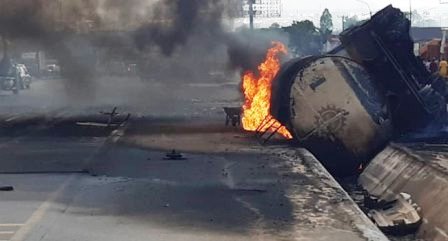 The fire disaster caused by a petrol tanker explosion at Upper Iweka area of Onitsha, Anambra State has raked a lot of havoc in the area.

It has been reported that a woman and her child lost their lives, and over 40 buildings ranging from 2-storey to 4-storey houses were razed by the fire. Along Ochanja and Menax markets, over 500 lock-up shops were also gutted by the fire. The tanker’s head reportedly fell off and went up in flames after spilling its content within the area.

Meanwhile, the Anambra State Governor Willie Obiano has sympathised with the family of a woman and her child who were burnt to death by the inferno.

Governor Obiano has directed owners of properties affected by the tragic accident, including shop owners, to report at the Conference Room of the Secretary to the State Government on Monday, October 21, 2019, see how the Anambra State Government can assist them.

In a statement by the Commissioner for Information & Public Enlightenment Don Adinuba, said that a panel will be set up immediately to determine the cause of the accident, why the firemen could not put out the fire and how the condition of the victims can be ameliorated.

The governor also prayed for the repose of the souls of the woman and child who died in the accident. The Anambra State Government will assist their families in their burials.