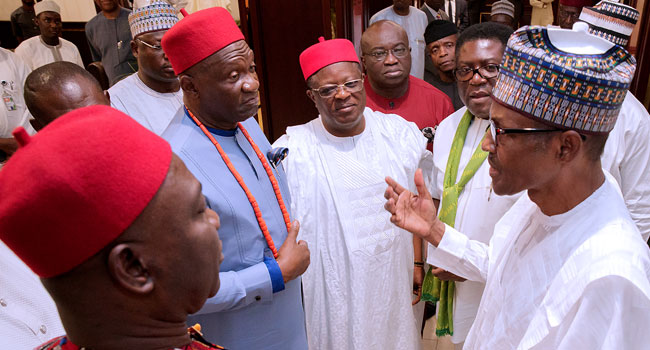 Leaders of the Southeast geopolitical zone of Nigeria have on Thursday, October 17, made good their promise to meet with President Muhammadu Buhari at the Presidential Villa, Abuja, as they had earlier stated in their previous meeting at the Enugu State Government House, Enugu.

In their meeting with President Buhari, the southeast leaders demanded amongst other things that the federal government should approve a special fund for the rehabilitation of the Akanu Ibiam Airport in Enugu State.

Chairman of the Southeast Governors Forum and Ebonyi State governor, David Umahi also demanded for the declaration of state of emergency on bad roads and erosion currently bedeviling the zone.

According to him, “We are here to kindly urge Mr. President to approve special fund for the Akanu Ibiam Airport just like what was done for Abuja Airport.”

He stated that the closure of the Enugu airport has grounded activities in the region and causing untold hardship on the people. They also called on the president to look into the roads of the region.

Secretary to the Government of the Federation, Boss Mustapha, Chief of Staff, Abba Kyari, and Minister of Information, Lai Mohammed were also in attendance.