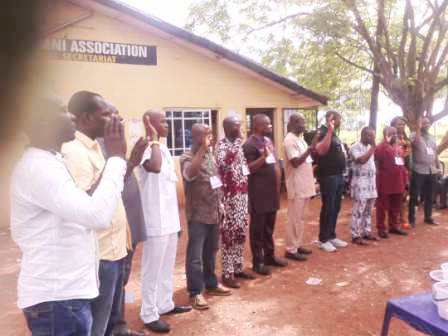 The election, which was adjudged to be free and fair, was conducted by the alumni’s electoral committee. The election saw the emergence of Ereke Kenneth as president. Other officials were equally elected.

The university’s deputy vice chancellor Professor Happiness Oselebe, expressed joy on the manner the election was conducted, and said it was one of its kind ever since the body was established.

She also commended the electoral committee on their roles in making sure the election was free, free and generally acceptable by all and sundry.

Others who spoke with NATION’S PRIDE included the special Assistant to the governor on Security, Hon. Saint Chinonye Aniako, who also expressed gratitude on the peaceful atmosphere during and after the election.

He charged all the members of alumni to join hand in making the association great.

The national organizer, Mr. Nnachi Okoro also called on all members to join hands together with the state government to fight cultism on campuses, and always support in contributing to the university welfare.