We will meet Buhari over welfare of our people – Southeast leaders 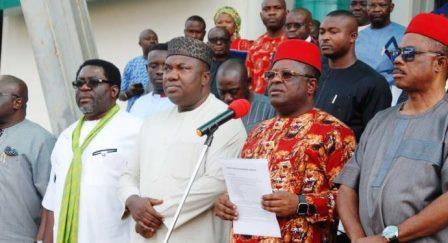 Governors of the southeast region and other stakeholders from the zone have said that they will meet with President Muhammadu Buhari on Thursday, October 17, to present to him their request over the welfare of their people.

They agreed on this in a meeting held at the Enugu State Government House on Monday, October 14.

Those in attendance in that meeting included chairman of the Southeast Governors’ Forum and governor of Ebonyi State, David Umahi, his Enugu counterpart, Ifeanyi Ugwuanyi, Okezie Ikpeazu of Abia.

Though the outcome of the meeting was not revealed to the press, but the forum promised to make everything known after meeting with President Buhari.

According to the chairman of the forum, David Umahi, “We resolved that we are going to meet President Buhari over the welfare of our people. When we come back we will tell you the details of the meeting.”

A source revealed that part of their discussion boarders on the closure of the Akanu Ibiam International Airport Enugu, which has been closed down for some weeks with no action yet by the federal government on reconstructing it.

The only alternate airport in the southeast after Akanu Ibiam is Dee Sam Mbakwe Airport Owerri.