Umahi doles out N24m to widows for independence celebration 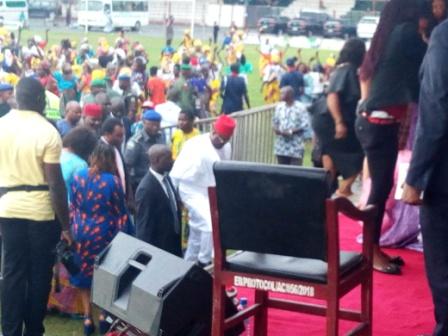 Governor David Umahi of Ebonyi State has distributed the sum of N24 million to widows across the state for the celebration of Nigeria’s 59th independence anniversary and 23 years of Ebonyi State creation.

The windows numbering 4,300 and a crowd of elderly people from all parts of the state were on Monday hosted to an Independence Party at the Ngele Oruta Township Stadium, Abakaliki by the Governor.

Admonishing the celebrants, the Chairman, Ebonyi State branch of the Christian Association of Nigeria and the Senior Special Assistant to the Governor on Religious and Welfare Matters, Rev. Father Abraham Nwali maintained that widowhood and old age were replete with many challenges.

He observed that in spite of the many excruciating experiences of the widows, ranging from abuse to economic hardship, the window enjoys God’s special attention through quick response to her prayers and divine succour in times of need.

Nwali who insisted that old age was a blessing, further admonished both the widows and the elderly to always anchor their faiths in God.

The Commissioner for Local Government, Chieftaincy Matters and Rural Development, Barrister Samuel Okoronkwo, in his remarks, chronicled the various succour programmes of Governor Umahi and his wife, Rachael to the widows, describing them as rare and unprecedented.

According to him, 4,000 of the widows were under the monthly payroll of the state government while others were variously empowered in the government’s many empowerment schemes for self reliance.

He announced that apart from other gifts from the governor, the bank accounts of each of the 4,300 widows who attended the party were credited with N5,000 to enable them celebrate the independence anniversary.

Okoronkwo said, “The governor in his usual care and philanthropy has paid for the transportation of all the widows here to and fro their various locations.

“As we are here right now, the accounts of the 4,300 widows here present have been credited with N5,000 each to assist them celebrate the independence. That amounts to the sum of N24 million Naira…” Highlight of the event was a special dance by the widows, the elderly with the governor and his wife.