Bayelsa Speaker resigns to save PDP from defeat 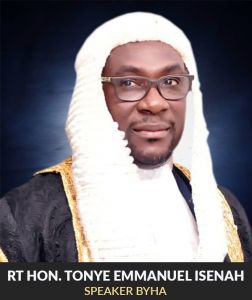 Following the persuasions on the Speaker, Bayelsa House of Assembly, Emmanuel Tonye Isenah to quit his position as part of realignment towards the November 16 governorship election in the state, the lawmaker has indicated that he is likely to resign on Monday, September 30, in order to save the Peoples Democratic Party, PDP, from defeat and further disintegration.

A report said Isenah hinted of his resignation while addressing staff of the Assembly after presiding over plenary on Friday, September 27 in the presence of the lawmakers representing Southern Ijaw Constituency 1 and 3; Felix Bonny Ayah and Moses Marlon.

The emergence of Senator Douye Diri as the PDP flag-bearer, recently, has triggered controversy as he and the present speaker come from Kolokuma-Opokuma local government area, and the PDP Stewarts, especially those from Southern Ijaw local government have advocated a realignment to ensure equitable distribution of prominent positions amongst the various zones.

This development did not go down well with Isenah, but with the current development, it is assumed that the Speaker will give way in the interest of his political party.