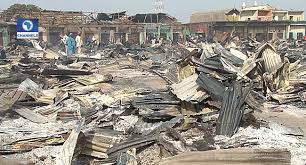 Since the constructions of over 1,300 shops in the new Keffi market by the government of Nasarawa state, efforts to effect the relocation of traders have been marred by incessant interference of some stakeholders of the area.

Investigations unearth how the multi-billion Naira ultra-modern market to easy up commercial activities is being frustrated by some powers that be within the Keffi town.

The new market based on our findings was built by the Nasarawa State government through a loan facility is over four times bigger than the old market control by Keffi local government council.

Commissioned by the immediate ex-governor Umaru Tanko Al-Makura in 2018 with the aim of relocating Keffi traders from the old market near the emir’s palace is to provide them enough and conducive business opportunity that would boost commercial activities, but the aim is becoming fruitless.

Further investigations proved that the market after the commissioning was concession to a firm from Kaduna State after due process for bidding.

Residents of Keffi who spoke to our reporter, in unison preferred that the market be put to it full operation as it will also free the surrounding road of traffic jam while others insisted that the old site be rebuilt to accommodate smaller traders in the neighborhood.

It was reliably gathered that the firm in charge of the new market has put in all modalities on ground to provide the needed services required which could boost revenue to the state and create employment to the teeming youth of Keffi.

Further investigation by our correspondent revealed that Vice President Yemi Osinbajo while on a tradermoni mission to Keffi rather addressed the old Keffi market traders instead of the new multi-billion Keffi market. The state governor has given a standing order to trades to relocate to the new market within two weeks.